Two months of this new year have already passed. The work is speeding up to get the new programming period running, starting new initiatives in the network, waiting for the new IT-system for applications to open and see the Leader groups really on the go.

Within the network the really new thing is to get a true networking started within the EMFF targeting both the FLAGs but also the actors within the fund. This work has been planned for a good time, funding has been applied for and soon the practical work will start. The NRN participated in a joint evaluation conference arranged by the four ESI funds in the beginning of February where some 150 participants from all over Sweden gathered for two days to discuss what is important to evaluate and if there are situations were an evaluation not is worth the effort.

About 15 Leader areas were also participating and in one of the workshops the learning experiences from evaluation of Leader were presented. The importance of ongoing evaluation was emphasized instead of just a final evaluation in the end of the period. A clear message was also that it is better to choose to evaluate projects and processes where clear learnings and improvements can be reached instead of evaluating everything just for the cause of evaluating. 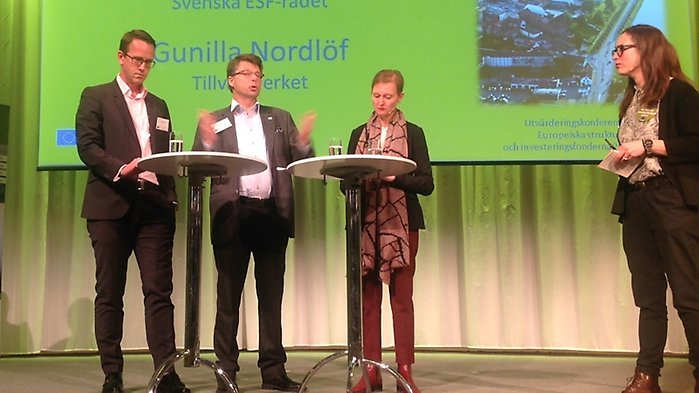 Three Directors-General opened the conference by pointing out the importance of working together between the ESI funds.

The NRN Coordination group for CLLD

The final meeting for the group in the start-up constellation was held in the end of February. In the future (phase II) the coordination group will be smaller since the responsibility for the direct communication between the Leader groups and the Managing Authority has been moved to the newly formed national Leader association, LUS. In the end of February there were still 10 Leader groups waiting for the final approval, or “start-up decision”, after amendments of their strategies. By the end of March all the groups will be up and running. A lot of education and training seminars are now organised by the managing authority regarding handling of applications and IT routines. Some regional meetings have been organised by the Leader groups with support from the NRN. There is a large need for exchange of experiences between the groups, especially in the start-up phase.

Housing is one of the most crucial issues for Sweden's new immigrants. After the asylum process, when having a permit to stay in the country, the immigrants need a more permanent accommodation. The NRN thematic group for social inclusion of immigrants and refugees have acknowledged the problem and runs a pilot project in five municipalities with the aim to ”comb with a fine-tooth comb” rural areas for free houses and apartments. In May a report will be ready with suggestions and methods on how to do for finding housing in rural areas.

A short report have been produced showing how young people have benefitted (or not) from the RDP in the last programming period. The figures are quite low.

Investments and support to businesses

There is a great need for awareness-raising activities within and about the nature tourism branch in order to promote a positive development. Similarly, there is a need to increase contacts between the public and private actors and society in general. The group has now developed a work plan with activities that will be implemented during the year. The focus of the upcoming work is to

The group will also make a survey of the different levels of training courses currently available and which ones are lacking, linked to the needs of the nature tourism operators but also the educational needs of the advisor service actors.

Communication is the keyword for the working group for service in rural areas. The group sees a great challenge to highlight the demand for elementary services in rural areas. It is also a task for the group to inform about the possibilities for support in the Rural Development Programme for different measures concerning services in rural areas, especially support for new service solutions. To have success with service solutions it is of great need to involve the authorities, municipalities and also the NGOs at the local level.

The group has taken part in workshops and seminars that have been arranged in different parts of Sweden. Other activities that the group is involved in consist of planning for a training to be offered to the LAGs about how to work with service solutions.

Up to this day the Managing Authority has got more than 110 applications, of which around 10 are for setting up-support. The processing of those will start in the second half of March, while the advisory selection committee, who will judge the applications for innovation projects, will have its first meeting in the end of May. There are for the moment not so many questions about new ideas to the innovation support, but more about the application process and useful contacts.

The most urgent transnational cooperation, beside a constant contact and collaboration with ENRD and FARNET, is the preparation for the next Nordic Baltic Network meeting in April. This time there will also be a focus on the EMFF beside the RDP.

Do you want to know how the Swedish Rural Network is organised? Then take a look at our new organisational chart. Click on it to magnify! 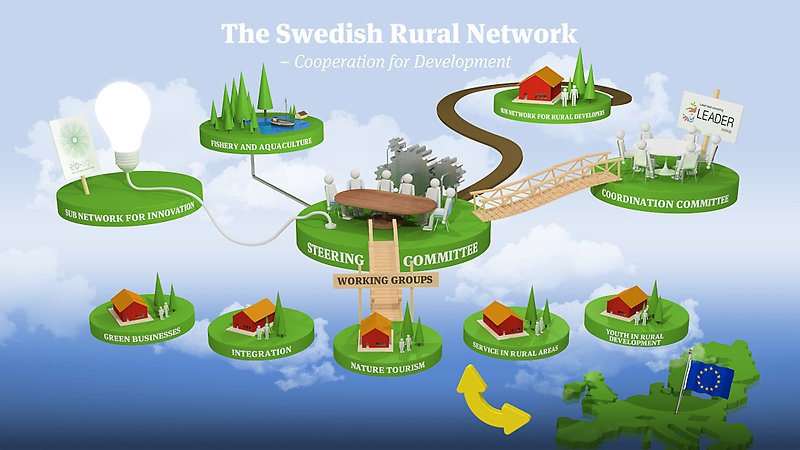